The budding free market at the end of our street. Notice the cabbages piled several feet high against the side of the building.

There are unassailable reasons to be a locavore: To keep money in the local economy; to know your supplier and thus the quality of your food; to save fuel that would be otherwise wasted on transportation. As globalization and population increase, we have become aware of the costs and perils of dragging foodstuffs around the planet.

When Gauss and I lived in Xi’an in 1981, eating locally was not a choice. We were locavores by default. Most farming was still done communally, but farmers were allowed to plant crops of their choosing on small individual plots and sell whatever they could transport to market on the back of heavy, single speed bicycles.

When we arrived in August the small free market down the road from us offered a variety of produce: green onions, eggplant, potatoes and yams, green beans, corn, cabbage, bok choy, hot peppers, and spinach. But since the Chinese used manure as fertilizer, all produce had to be cooked thoroughly. Fresh salads were not on the menu.

In the fall came apples, pears, and the local specialty, persimmons. There were several varieties, from large, firm-fleshed fruits the color of apricots to little red orbs with an almost liquid center. Peanuts, walnuts, and raisins showed up, even at the state stores, which were notorious for running out of food. 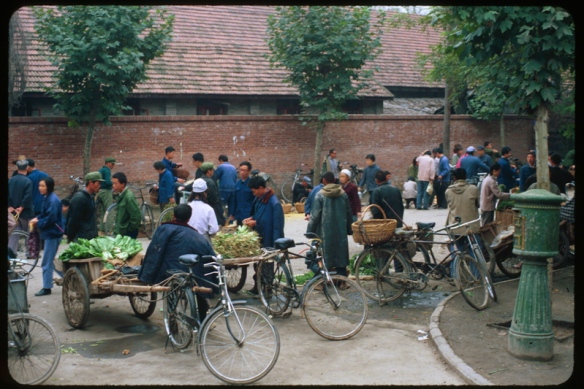 The farmers market at the end of our road where we bought most of our food.

At the free market, there were always several farmers selling brown and white eggs from baskets, and usually at least one fellow who sold live chickens. These were transported on a special rack fitted over the back fender of the bike. It held about twenty chickens, suspended by their feet. It was up to the consumer to kill, pluck, and dress the bird. Once in awhile a little cart with the single carcass of a freshly killed goat or pig—the severed head of the animal serving to advertise—appeared in the lineup with the vegetable vendors. The farmer who had raised the unfortunate animal stood behind his cart, cleaver at the ready, to hack off whatever quantity of meat you wanted to buy. It doesn’t get more local than this!

Grain was rationed and could be purchased in state-run stores, but the rice there had been warehoused for several years and was often broken and weevil-infested. Once in awhile a producer showed up at the free market with a bag of recently harvested rice, pearly white and clean. People lined up to buy it. Periodically someone would walk through our neighborhood hawking tofu or goat’s milk. Everything sold in our neighborhood came from farms within a 20-mile radius.

Eating local was fine—until winter set in. As sunlight waned and temperatures cooled, offerings in the market dwindled. Xi’an’s continental climate gave it four distinct seasons, and winter temperatures hovered either side of freezing for a few months.

Carrots and potatoes replaced eggplants and cucumbers, and then these, too, became increasingly rare. We could find garlic, ginger root, soy sauce, and dried red peppers pretty reliably, but after a couple of months our palates tired of these same seasonings for every dish.

Because we were Foreign Experts, paid ten times an average person’s salary, we could relieve the monotony of local offerings by purchasing exotic canned goods, too expensive for most residents. We occasionally found strawberry jam in tins the size of a tuna can at main downtown department store, and we learned to hoard peanut butter and milk powder if any could be found in town. We usually biked downtown once a week, and about every fifth or sixth trip, we might find one of these scarce items. Occasionally we bought the Chinese version of that Minnesota staple, Spam. By local standards it was exorbitant, and few people could afford it. We had to dust off the top of every can we got.

In October, we were invited to a potluck with the other foreign teachers in town at the Xi’an Foreign Language Institute. I was proud of my invention, a fruit salad composed of cubed apples, walnuts, raisins, and canned mandarin oranges—until I went to add it to the buffet table and saw three others just like it!

As winter approached, nearby fields sported cold frames improvised from bamboo wands arched over rows of spinach and onions and covered with cloudy plastic film. December through February, the selection in the market dwindled to cabbage, tofu, green onions, and tiny leaves of spinach from the cold frames. We settled into the culinary routine of northwest China. Rice. Tofu. Green onions. Pork.

And we jokingly referred to our monotonous meals as “the diet with the built-in willpower.” The clammy, gray weather, combined with our culinary ennui, left us in a dark mood.

When our year was up, we traveled to Hong Kong before heading home. Immediately after finding a hotel room and showering, we headed to McDonalds for a Big Mac, fries, and a shake. I rarely ate at McDonalds at home, but after a year of forced local eating, this was absolute nirvana. We were dying for something other than stir-fried vegetables and little shreds of protein, dying to pick up a sandwich with two hands and take a big bite. We craved the crunch of the fries, the exotic creaminess of the chocolate shake. That evening, we headed to a restaurant with a salad bar where I plowed my way through a heap of raw lettuce and cucumbers, munching like a cow in a pasture. It was sublime.

I can’t reconcile my hedonistic desire for variety with the practical fact that importing foods squanders precious energy. But life without culinary variety—winters of stored apples and root vegetables—is grim. 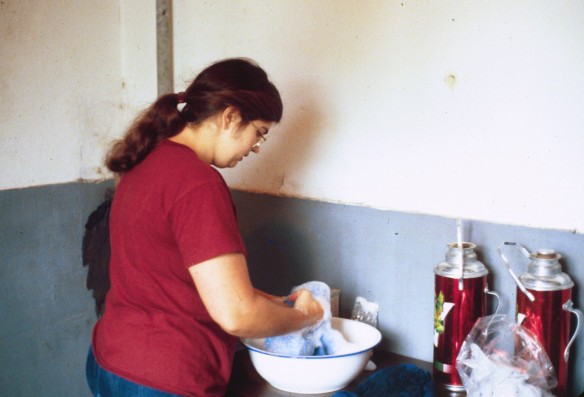 Washing a sweater in an enamel basin in our kitchen. I was too shocked to take pictures the night we arrived. Gauss took this photo a few weeks later. Notice the big enameled Thermoses. They were everywhere.

I catch myself bringing up my China experiences a lot—probably to the chagrin of my conversation partners.

Am I wallowing in the glory of my youth when I dared to embark on a year-long adventure? No, I realize that it comes up so often because it was a transformative experience. It occurred early in my life, and I have looked the world through the lens of that experience ever since.

I’m a baby boomer. Life in the 1960s and 70s for white, middle-class kids was pretty sweet. Most of us could protest and nothing bad would happen to us. We could swear at our parents and we knew they would still love us. We could bike to a protest on campus and when we came back, we could sleep in our cozy beds. It was easy to feel like we had the world by the tail.

A hundred years earlier even royalty did not enjoy the comforts we had in our middle class suburban ramblers: central heat in the winter; perhaps air conditioning on hot summer days; a stove that lit with the turn of a dial; a toilet that flushed; hot and cold running water any time of day; a refrigerator to keep our food from spoiling; a washing machine; a car to take us wherever we liked.

China in 1981 transformed me because suddenly I did not have those things. China was agrarian and low-tech. The pace of life was slow. Nor, for much of the time, could I socialize unfettered with my Chinese friends. The Cultural Revolution was still visible in the rearview mirror.  Handlers watched us. Neighbors peeked out the window to note who was coming to visit.

That year was uncomfortable, as periods of change are. At times I was furious, but I survived and sometimes even thrived. I learned to be happy cooking dumplings or walking through neighborhoods where people went about their daily business. A frank conversation with a friend away from listening ears and prying eyes was something to write about. A piece of chocolate was a rare treat.

When I got back to my home in the States, turning on the hot water tap, or pushing a button on the washing machine, was like magic. Thirty years later I still think about it when I brush my teeth or do the laundry.

Empathy and appreciation are in all of us. The pace of modern life often drowns them out, but stripped of convenience and clamor for that year in China, I rediscovered them.