The day before the presidential election, a friend who had voted for Hillary Clinton displayed this photo of the candidate. “You know that’s styled like a Cultural Revolution poster of Chairman Mao,” I commented.

She answered that she’d bought it from the Hillary store. I was surprised. A favorite attack tactic in races like this is to equate Democrats with communism and Republicans with fascism. Yet here was the presidential candidate’s own organization marketing this image of her to the party faithful. 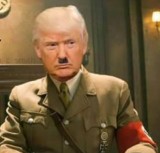 Critics of candidate Trump have Photoshopped images of him styled to look like Hitler. These would never be sold by the candidate’s campaign. In fact, sympathetic websites have ranted about the comparison as unfair and dangerous.

Was the Clinton camp going for irony? Was there a mole in the graphics department who thought s/he could pull one over on her supporters? Were they clueless? Or is America officially over its fear of socialism?